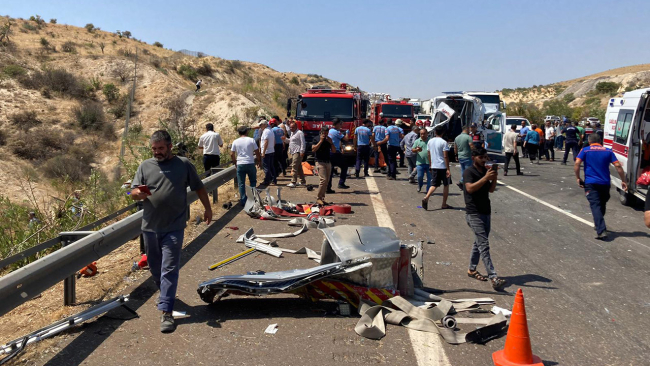 In the south-east of Turkey (Gaziantep province), two road accidents which occurred on Saturday August 20 left several dozen dead and around sixty injured, local authorities announced. The two accidents happened within hours of each other.

The first killed at least 15 people and injured 31, said the governorate of Gaziantep province, which earlier on Saturday reported 16 deaths in the accident. The pileup involved “a bus, a rescue team and an ambulance (…) on the highway between Gaziantep and Nizip”, wrote on Twitter the governor of the province, Davut Gül.

According to the Turkish DHA news agency, an ambulance, a fire engine and a vehicle of a team of journalists – which had gone to the scene of an accident – were hit head-on by a passenger bus traveling on the same highway.

Four rescuers, three firefighters and two journalists from the Turkish news agency Ilhas are among the fifteen dead, according to local media. Images released by the DHA agency showed the rear of a partially shredded ambulance as well as the coach hit in the accident, lying on its side and with the front ripped open.

Nineteen more dead in another crash
A few hours later, nineteen other people were killed and nearly thirty were injured, 250 kilometers further east, in an accident affecting a heavy goods vehicle, according to Turkish Health Minister Fahrettin Koca.

“The number of people who lost their lives in the accident (…) has unfortunately increased to 19. The number of injured is 26, including six in serious condition”, said the minister on Twitter, referring to rising an initial death toll of 16.

“The accident (is) occurred following the breaking of the brakes of a truck which hit a crowd in Derik”, in the province of Mardin, had previously detailed Mr. Koca.

Videos broadcast by the Turkish press show a driver losing control of his truck, hitting several vehicles at full speed and pedestrians trying to flee.

According to Turkey’s official Anadolu news agency, a traffic accident involving three vehicles had occurred at the same location shortly before, and rescue teams were on the scene when the driver accidentally rammed into the crowd.

Justice Minister Bekir Bozdag announced on Twitter the opening of two investigations into these tragedies. “I wish mercy (…) to our citizens who have lost their lives. All our means are mobilized”, he wrote on the social network, wishing a “speedy recovery to the injured”.